I have a reputation for being a very outspoken person. This candidness began in earnest as a queer writer growing up in conservative Tennessee, continuing as a playwright in Seattle, and in every place I’ve called an artistic home for more than a month. “Feminist Killjoy,” “Nagging Queer,” and “Charmingly Amusing Annoyance,” are names I’ve carried proudly after making waves in predominantly white male, straight and cis, and surprisingly conservative communities. I’m not a “fun gay,” but I am fun and funny and queer and feminist and playwright and teacher. And I tend to write plays that fit those descriptors. My queers aren’t “fun gays.” They don’t roll over easy.

I find myself drawn to bizarre, terrifying worlds with strange rules; plays that often express metaphoric and real violence on its players, but with humor and heart throughout. I tackle stories that haven’t been told in a context outside of white cis-hetmale living room realism; stories where it’s possible to laugh while being gutted. What drives me as a storyteller are questions, problem-solving. Such as, how do you make the awful effects of climate change personal, magical, and queer (You Must Wear A Hat)? Or, how do you make uncomfortable topics like fat bodies being relatively ignored unless they are being shamed, engaging and honest without preaching (Tiny Thin Woman Inside)? Or, why didn’t anyone listen to Cassandra, but the boy who cried wolf got the benefit of the doubt three times (Bell at the Back of Her Throat)? Or, how do you create a family drama when there’s only one childless queer left standing in the family from a lineage that may be better off dying (Daughter of the Confederacy)? 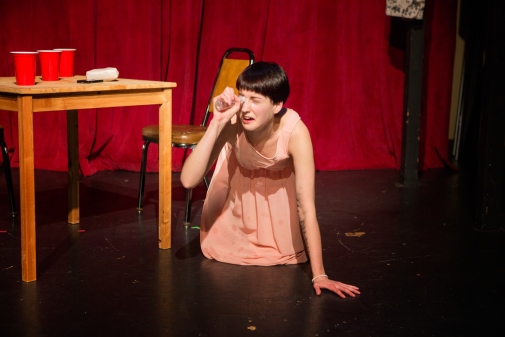